On 24th October, at 3.00 o’clock, the students, the parents and a lot of teachers of Istituto Comprensivo8 provided greetings to the foreign delegations composed by thirty-eight students and eighteen teachers coming from Croatia, Latvia, Slovakia and Spain, on the occasion of the “Erasmus Plus KA2 Flip&Movie Project”. The Italian students welcomed their foreign mates in the gym of Tinozzi school performing a concert playing pieces of music such as “Hymn of Joy”, The Italian anthem, “Adiemus”, “Adagio” and a medley of the Beatles’most famous songs. “Tinozzi Youth Orchestra” and the “Aulos Ensemble Choir” were respectively conducted by three Music teachers of the school: R. Masci, A. Perrone and A. Cecamore.

The foreign students and their teachers were also greeted by a speech delivered by the Headmistress of Tinozzi School, Mrs. Annarita Bini, who gave a warm welcome to them, conveying the utter joy and pride felt about availing such an educational experience, and highlighting how Europe and culture can be the determining factors to improve young people’s educational path.

Many other authorities attended the ceremony: the Mayor of Pescara, Marco Alessandrini; the President of Province Antonio Di Marco; Marisa Di Cioccio, from the Province Department and the Major Domenico Candelli, commanding officer of the NAS unit of Abruzzo. In his welcome speech, the Major of Pescara underlined the special opportunity the town of Pescara has been given, about being an active partner in such a praiseworthy project, and remarked on the importance of Europe as a concrete reference point in an undertaking of this extent. The English language teacher Enrichetta Donzelli, provided translation and was in charge as the interpreter for the overall event.

After the authorities’ speech, each delegation displayed a video concerning natural beauty spots and picturesque landscapes of their land. Each member was given a badge and a backpack by the Headmistress, where they could find all the required material for the following days’ workshops. Eventually, the school’s choir performed the most famous Italian song ever, that is “Nel blu dipinto di blu”, which was sung and danced by the whole audience.

At the end of the ceremony, the 24 Italian students (10 ambassadors-facilitators from III B, C, F and 14 students from III B, F, H), together with the 39 foreign students, were involved in inter-active games set up by Erika Gerardini, an expert in Euro-project management. She arranged a number of ice-breaking activities in order to let the students better know each other: at first, each of them introduced him or herself, talking about favourite activities and interests. Afterwards, all the students were disposed by each one’s nationality, in such a way as drawing up a Europe map.

Then, a PowerPoint presentation was displayed, showing all European flags, and the students were asked to give answers to questions about Europe and its countries. The ceremony concluded with a “buffet” arranged by the Italian students’ families who were pleased to bid their own welcome to the foreign delegations, offering savory cakes and pastries, typical of Abruzzo. 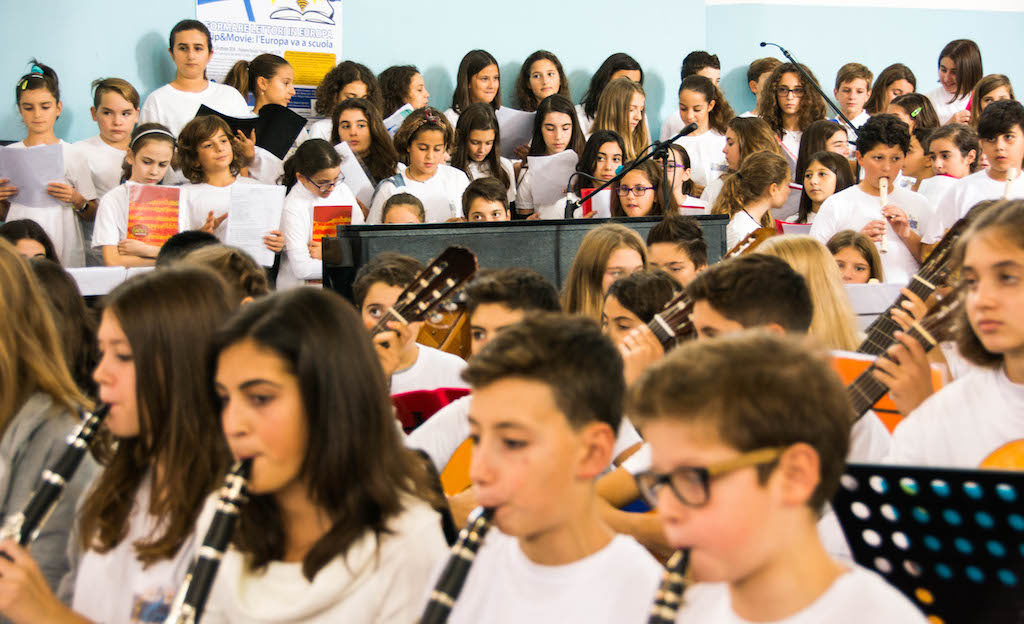 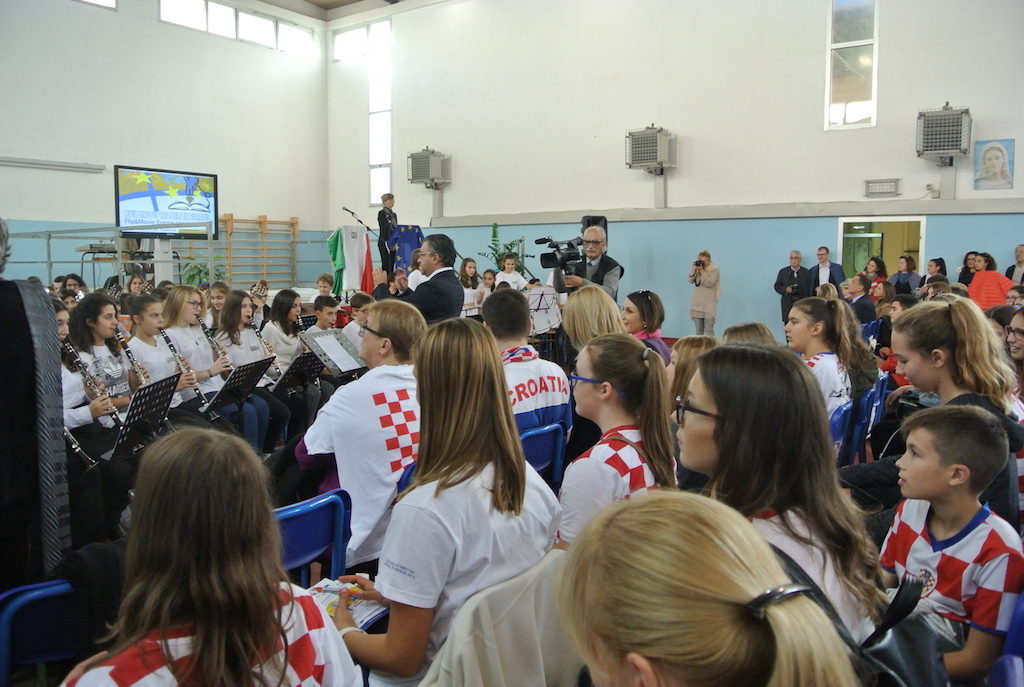 Buffet organized by students’ parents in the Main Hall. 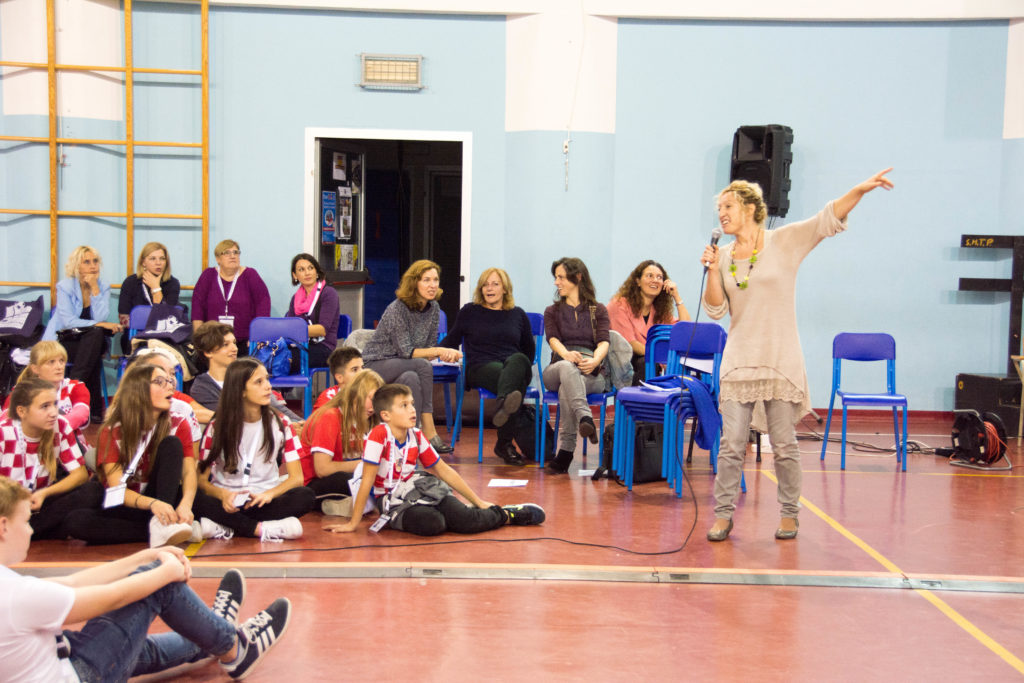 The programme of the morning from 9 a.m. to 11 a.m. was “Europe enters the classes”, when thirty-eight foreign students, divided in small groups, met their Italian partners in second and third year classes. Led by the Italian “ambassadors”, the students had the opportunity to attend lessons held by Italian teachers and take part in other interactive activities with the aim of socializing and developing communicative and linguistic skills all together. 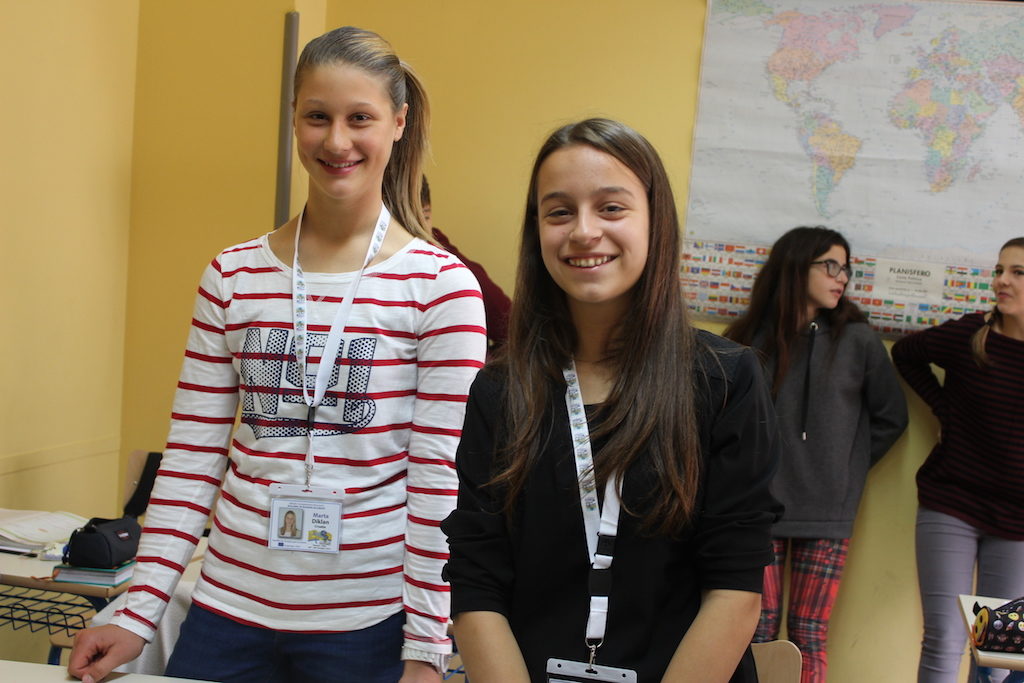 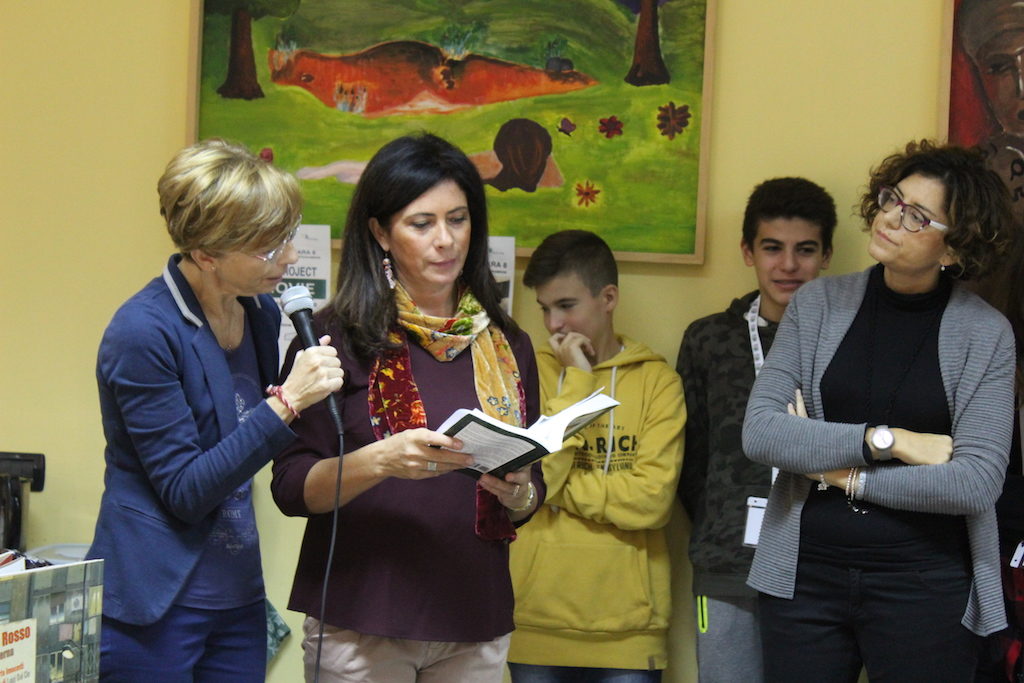 The experts Ranieri Antonella and Filograsso Ilaria present the content of their workshops.

After the entrance in the classes there was the creative workshop held by Antonella Ranieri. She explained how to plan and realize a picturebook. She divided the students into several groups to create different picture books about “Red riding hood”. The books were created by the students using different colours. At the end of the workshop the expert collected the outputs made by each group. 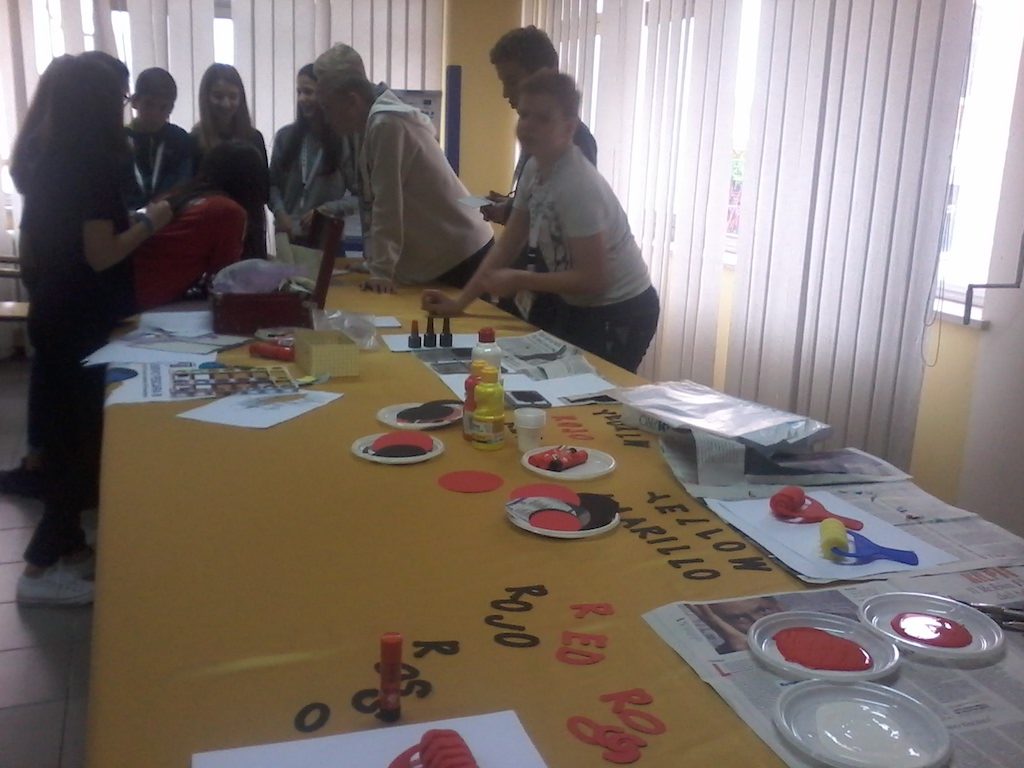 In the afternoon teachers and pupils of each delegation met at Ex-Aurum building in order to visit ’EuropAurum-“ Europe direct Pescara”. The activities were: 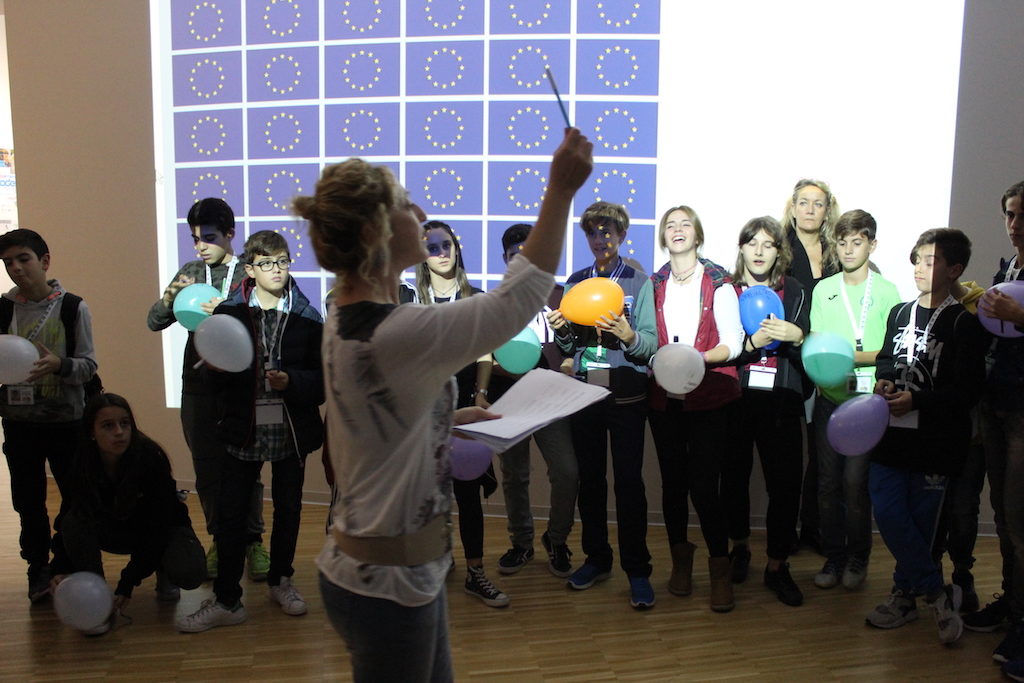 On the first day of her workshop the expert Antonella Ranieri presented the activities at Media Museum and explained to the thirty-one students involved in the activities how to plan and realize a picturebook. She showed some different picturebooks to the students and underlined the importance of illustrations and graphic techniques used to convey different feelings and emotions to the readers.

Then she divided the students into two groups and gave them a written text to read aloud and divide in six sequences. After that she taught the students how to create the storyboard and choose the characters and the setting. Later she showed some graphic techniques to use while drawing the illustrations for each section of the storyboard. At the end of the first part of the workshop the expert collected the outputs of each group.

The other thirty-one students attended the workshop held by Martina Corongiu. Mrs Corongiu started the activity displaying a video about the typical tools and devices employed in film making: basic gear and key creative roles such as directing, screenwriting, setting, acting, editing. Along these subjects, some clips by worldwide famous movies were shown, in order to let students better figure the issue out and providing concepts and technical information. Students were introduced to various types of recording devices and taught how and when to use them. Afterwards, the students had the opportunity to ask some questions about the topic of the workshop, undertaking a gripping debate. Eventually, every student had to choose his or her own role, which would have been performed the following day. After lunch at Caffe Letterario the students of the partner countries, accompanied by the teachers, at 3 pm, went to the “Museo delle Genti d’Abruzzo”. Divided into two groups, in turns they had guided tours of the museum and participated in a workshop on traditional sweets of Abruzzo.

The activities were coordinated by experts of the Museum, who taught the students how to make “taralli”, typical sweet round-shaped biscuits. They gave the students eggs, flour, lemon, sugar, milk and all the ingredients and the tools necessary to become “chefs” in a fascinating atmosphere of the past. 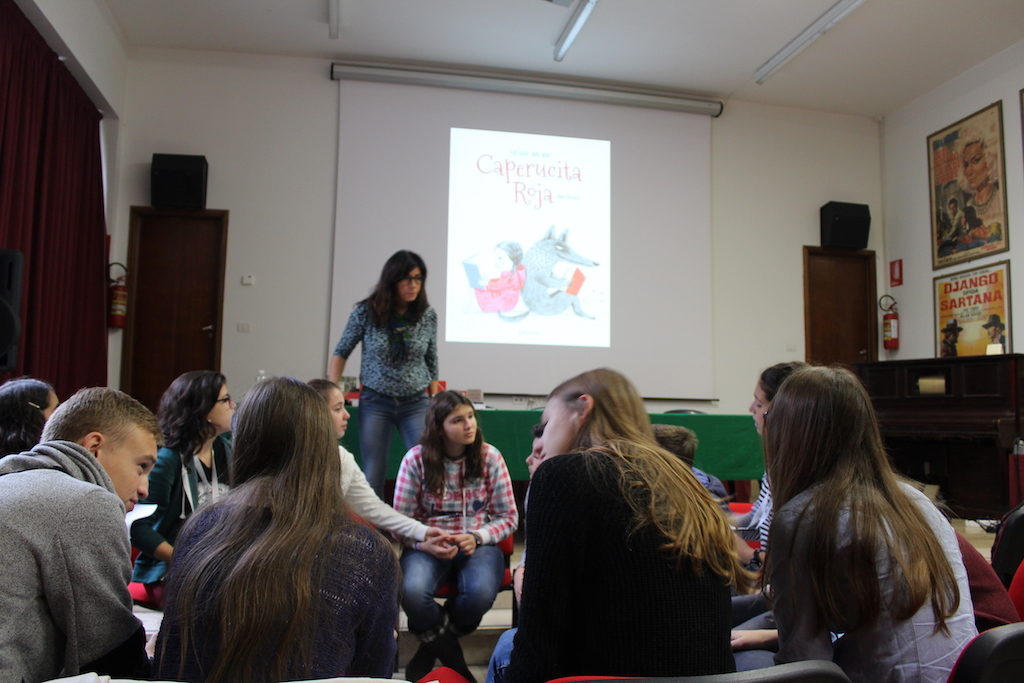 Workshop with the expert about Book in progress at Media Museum. 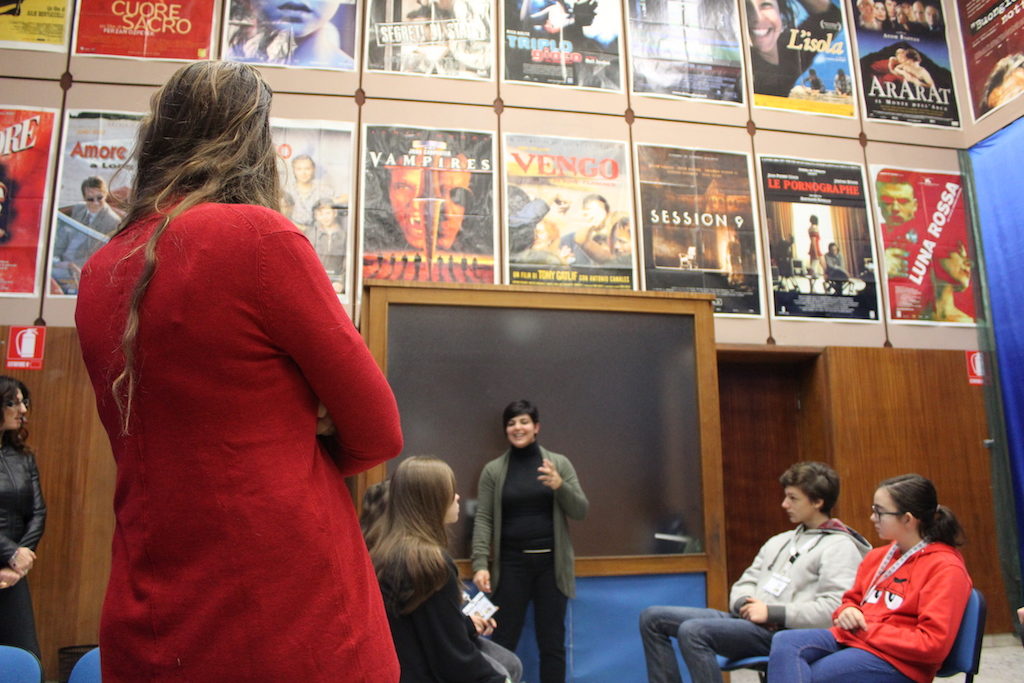 The expert Martina Corongiu gives information about the workshop “Making a Movie” at Media Museum. 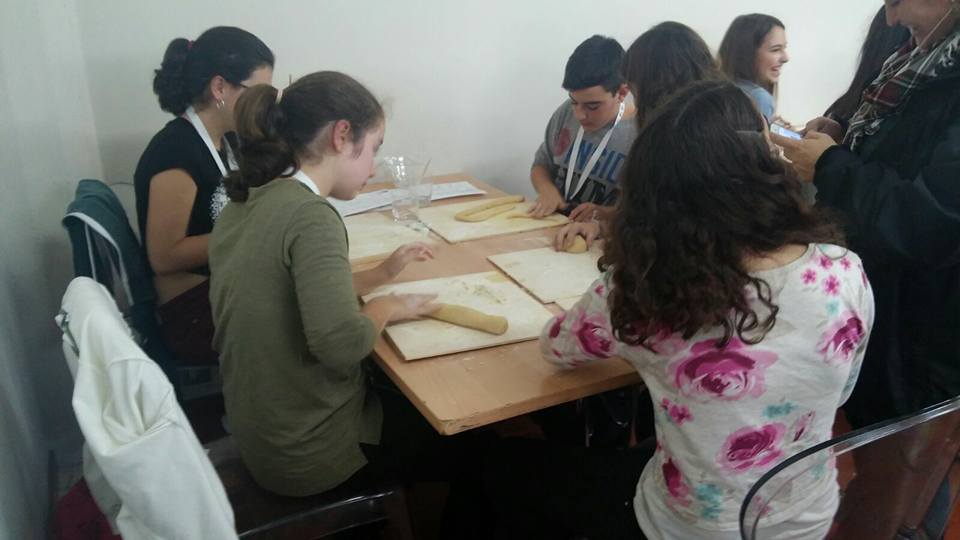 On Thursday morning, the students involved in Making a Movie could fulfil their task of shooting their short film, based on the fairy-tale “Little Red Riding Hood”. The goals of the workshop were: introducing the students to the language and crafts of film making, giving the students a broad array of skills needed to produce a well-told short story with moving images. The outcome of the workshop is the short film “Little Red Riding Hood”, arranged and performed by Italian, Croatian, Slovakian, Spanish and Latvian students.

At the same moment the other students attended the activities presented by the expert Ranieri who showed the maquette (the model of the picturebook) produced using the drawings and illustrations created by the students and then the digital version of it pointing out some mistakes made in the page setting. After that the expert encouraged the students to make the corrections following her devices. At this point each group of students went on creating the illustrations of the picturebook. Some of them used the rubber crepla, others coloured patterns, to shape the characters and the other elements of the setting.

Finally the students stuck all the illustrations on each section of the storyboard realising two picturebooks. After lunch at the restaurant “Il Ruvido” the students went to Tinozzi school with the accompanying teachers.

On Thursday afternoon, foreign students and Italian “ambassadors” took part in a series of games and tournments in the gym of the school. Guided by PE teachers, all the students have been divided into 8 teams of 8 players each to play “block the ball” game, that is similar to volleyball but less dynamic. The players had to wear a t-shirt with the team colours: red, striped, blue, green, orange, black, yellow and sky blue. After some matches lasting 5 minutes each, the “striped” team won the competition. At last, the afternoon of sport and entertainment ended with teachers and students dancing all together in a group dance.

The “farewell dinner” concluded this day. It took place at Regent Hotel and was a very suggestive moment. All the Italian teachers and students “said goodbye” to the European partners, some Italian students’ parents took take part in this special occasion too. The headmistress after a lovely speech in which she thanked all of them for the warm and active participation she gave the foreign teachers and students some present as souvenir of Pescara and the Italian delegation. 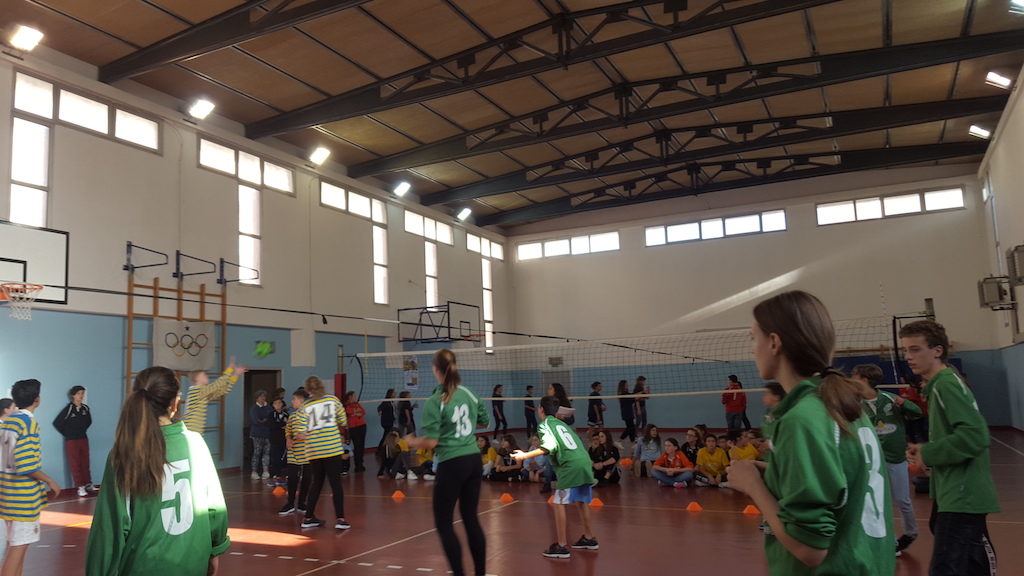 Sports games in the gym. 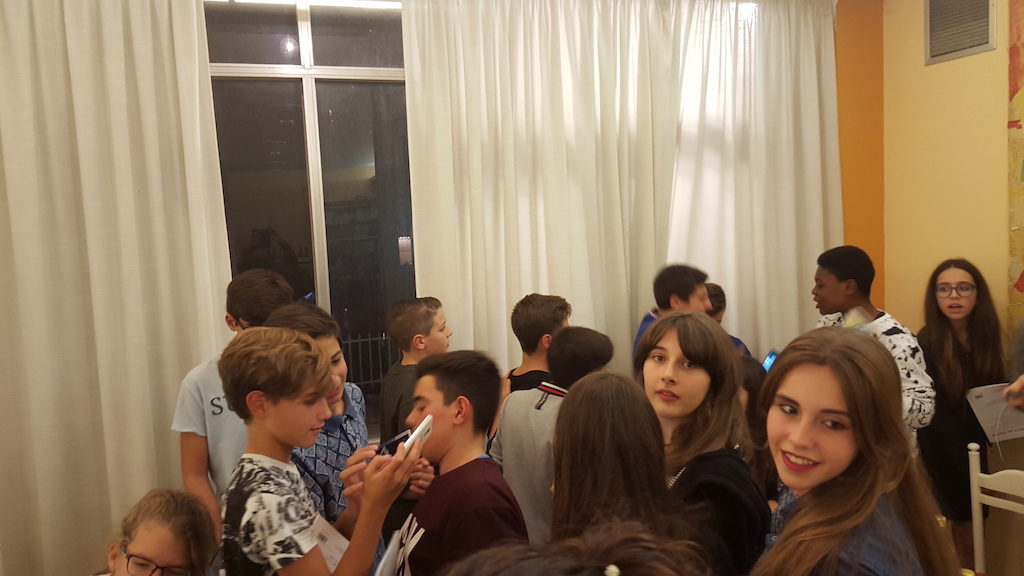 On the last day of the meeting, at 9.00 a.m., all the delegations met in the school gym to take part in a series of activities called “Ateliers”. All the students were divided in 8 teams and everyone had to wear a cockade with the team colours. Then, each group was invited to gather around some “places” prepared by the host on Creative Writing, English, Maths, Feelings and Art. The students had to carry out the activities in 20 minutes and move from a place to another, after finishing them. At the Creative Writing corner they had to create a new story having an incipit, at the Maths and English place they had to solve riddles, proverbs and crosswords; at the Feeling and Art place students had to make drawings and write messages on cards about their week in Pescara. These latter ones were hung on the “facebook” poster and they were greatly appreciated for their authenticity and originality. At the end of this itinerant activity, the Italian teachers gave detailed feedback on the outputs and proclaimed the winning team for each competition. Then, there was a break organized by “Campagna Amica” with local products such as cheese, bread and oil.

In the second part of the morning, the “goodbye moment” was focused on the socialization of the works realized during the workshops held by the experts Antonella Ranieri and Martina Corongiu at Media Museum.

After that, the Italian headmistress, Annarita Bini, awarded who had realized the best ones. Finally, all the delegations said goodbye with the promise to see each other in April in Croatia. The greeting of the Spanish delegation was really exciting, since they showed a video with the most significant moments of the “European” week in Pescara. 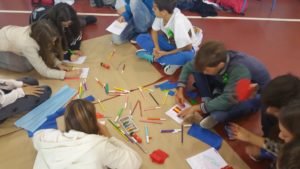 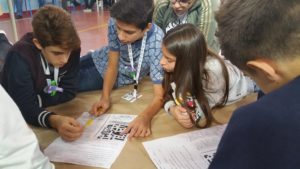 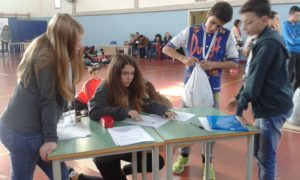 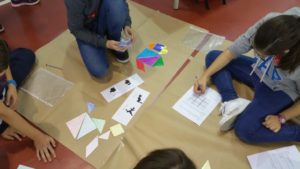 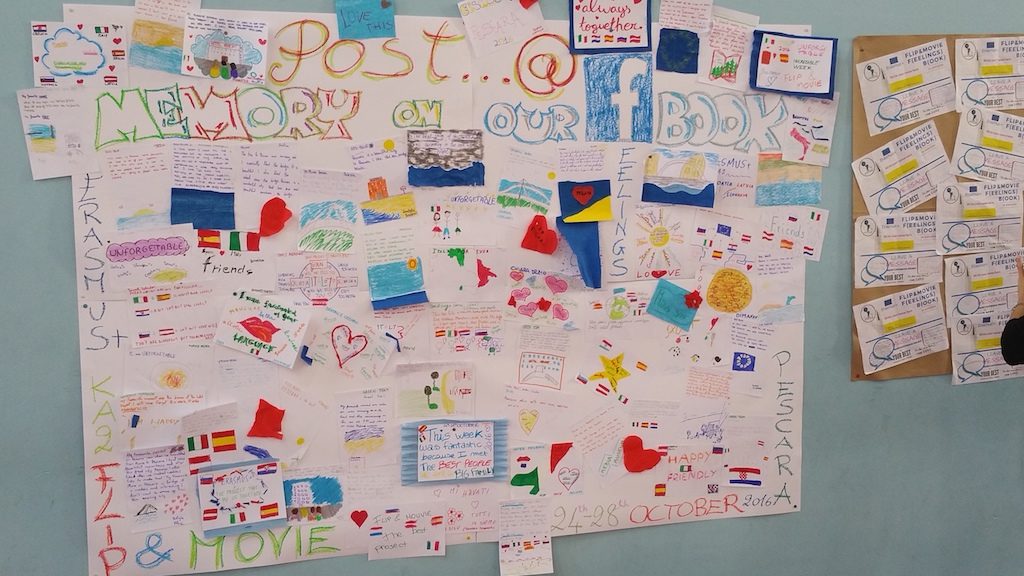 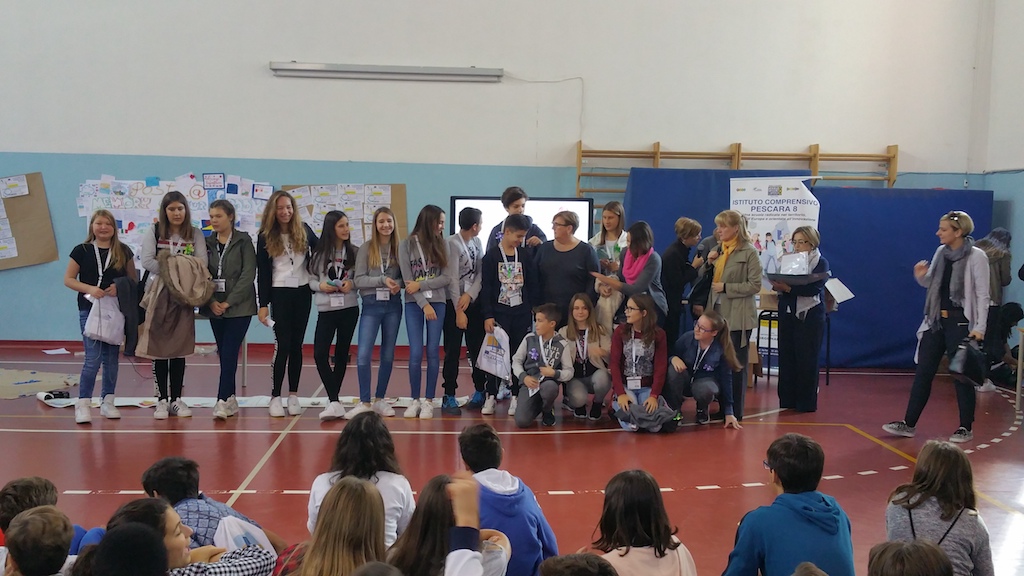 Distribution of the certificates on behalf of the Headmistress.